Khensur Rinpoche, Geshe Tashi Tsering is a well-loved and highly respected lama of the Gelug order of Tibetan Buddhism. He is currently based in Brisbane, having returned to Australia in 2014 after nearly 6 years in India, where he was first Vajra Master and then Abbot of Gyü-me Tantric College, posts for which he was chosen by His Holiness the Dalai Lama. His title, Khensur Rinpoche, reflects the fact that he has been the Abbot one of the great monasteries.

That a teacher of such remarkable wisdom and compassion, who is so committed to benefiting his students and the broader community, resides and teaches in Brisbane is truly amazing. The extent of our great fortune is more evident once one understands something about his life.

Khensur Rinpoche was born in Kardze in eastern Tibet in 1937. At the age of seven he joined his uncle and brother at a small, local monastery called 'Khangmar' and began the traditional monastic training. At such a young age he did not know the recitations performed by the assemblies at the monastery, so instead he would sit and make a prayer he had memorised:

"With my heart going out with great compassion in whatever direction
the most precious teachings have not yet spread or once spread have declined
may I clearly reveal this treasure of happiness and benefit".

When he was 17, after completing his preliminary education at Khangmar, he went to Lhasa and was enrolled in Sera Je Monastic University, where he commenced advanced studies in Buddhist scriptures and debate. It was here that Rinpoche decided that studying the Dharma was really the most beneficial thing to do and set his mind on becoming a geshe.

Following the annexation of Tibet by Communist China a few years later, like many others Rinpoche fled across the Himalayas to India, walking for almost a month with very little to eat or drink. He resettled in the refugee camp at Buxor in north-eastern India, along with monks from many different monasteries and all lineages of Tibetan Buddhism. The food and living conditions were extremely poor and hundreds died from disease but the monks continued their monastic studies as best they could.

Ten years later Sera Monastery was re-established near Mysore in southern India. There, after a further seven years of study, Rinpoche entered the seven years of written and oral debate examinations required to achieve his geshe degree. During this time he also taught three or four classes a day in various subjects including philosophy and monastic discipline. Rinpoche excelled in all his exams and finally in 1984 was awarded the rank of lharampa geshe with the highest honours.

Rinpoche then entered Gyü-me Tantric College to train in the tantric texts and rituals. He sat debate examinations on tantric subjects, first at Gyü-me in 1988 and 1989, then at Sera in 1990, in the presence of the Abbots and officials of all three great monastic seats as well as His Holiness the Dalai Lama.

Following repeated requests by Lama Zöpa Rinpoche made over several years, Khensur Rinpoche finally agreed to come to Australia to teach at Chenrezig Institute on the Sunshine Coast. He arrived in June 1990 with the blessing of His Holiness. He taught regularly for several years at introductory and intermediate levels before establishing an advanced study programme, the Buddhist Studies Programme (BSP), for students interested in understanding the profound teachings in a deeper way. The BSP still continues more than 20 years later.

So now it seems that the wishful prayers of the young monk at Khangmar Monastery in eastern Tibet have been realised: Khensur Rinpoche, Geshe Tashi Tsering has firmly planted the root of Dharma here in Australia where it did not exist before. Through his kindness and great skill in teaching, those wishing to gain a clear and unmistaken knowledge of the Buddhist teachings now have the opportunity. 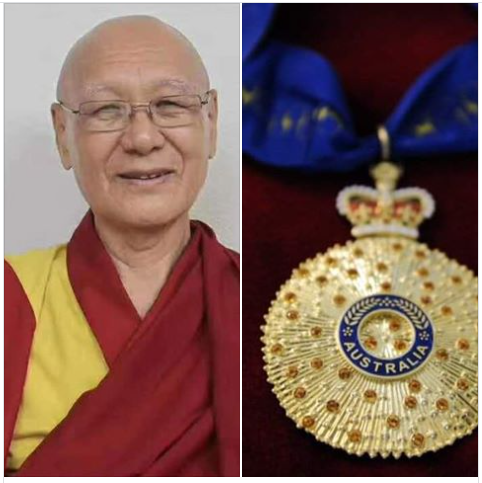 In 2020 Khensur Rinpoche was awarded the Order of Australia Medal for services to Buddhism and education.